It is that spooky time of year again and love it or hate it the children are certainly interested and want to get involved. We don’t do anything remotely scary as the children are very sensitive, but we do read our favourite books ‘Room on the Broom’ and ‘Pumpkin Soup’ and base activities around these.

There has been a lot of talk surrounding Halloween and the use of plastic this year. I think this is great as we try hard to limit our use of single use plastics at home and I wanted to write this blog showing the activities we can do with the Halloween themed items as well as other ideas that can be used at other times of the year. I have had my Halloween resources for four years now and I can see them lasting a good few more years yet. The craft activities we do are also mindful of the environment and creating waste and so we don’t tend to stick things down so for example using pom poms and pipe cleaners in play dough means they can be used again and again. We tend to take photos of the finished products and then deconstruct them once the children have finished with them reusing the resources where we can. This not only keeps rubbish to a minimum but also means it is good for our purses too as we don’t need to constantly buy craft materials. Of course if the children are very keen on a picture or model they make then we keep it in their special folder.

Here are our spooky activities for this year which we have enjoyed with a few notes to show how the resources can be adapted and used at other times of the year.

This doesn’t have to be a Halloween activity as spiders are popular at all times of the year. I have collected a few spiders from mini beast collections and a Halloween bug pack. I put out of date yellow split peas on the base of the tray, but you could use anything really such as lentils, pasta, rice. They can then be used again and again. Place the spiders on top of the lentils. Using the masking tape or paper tape create a web over the top of the spiders. Give the children some numbered pots and tweezers and challenge them to rescue the spiders. Can they put the correct number into the pots? Isabel loved this activity and tried to work out how many legs she had in her pot as she had caught 12 spiders. We worked through it together and she was able to find the answer using addition facts she knew. Megan was able to practise counting reliably to 10 and Charlie enjoyed counting his spiders. This is also a great fine motor activity too. 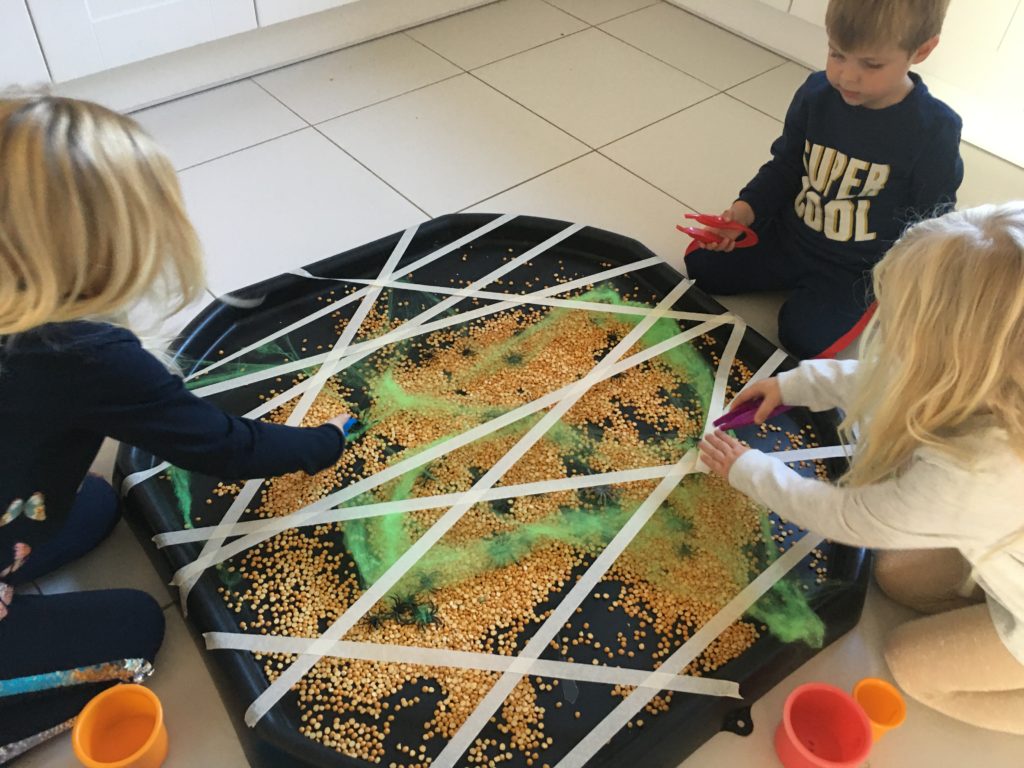 Having the opportunity to go to a pumpkin farm is great fun and has become part of our tradition for this time of the year. The children are really able to understand the concept of size by picking up different pumpkins and comparing them with others. Lots of lovely language being used as well such as “That one is too big and heavy I won’t be able to carry it.” “My one is bigger than yours.” “Who has the smallest pumpkin?” “Let’s measure our pumpkins.” The pumpkins are also measured by size when paying for them so the children  are able to watch a different measuring system. It is also nice to know we are supporting the local community by buying our pumpkins locally as well. 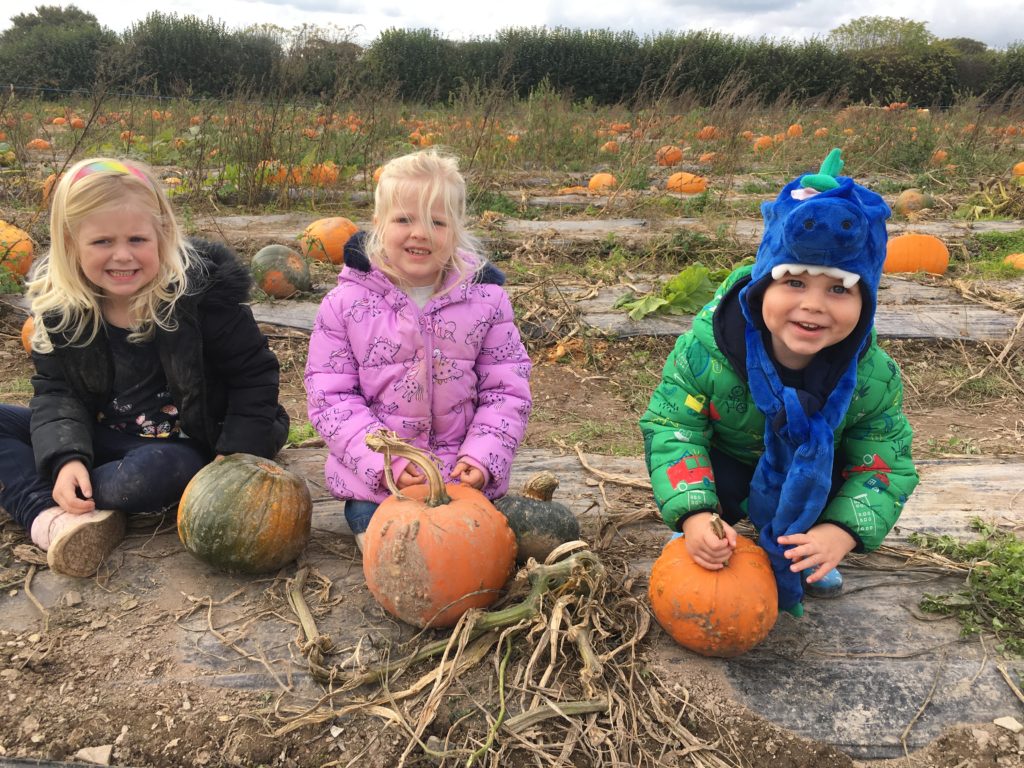 One of our favourite books to read is “Room on the Broom” by Julia Donaldson. After reading it we decided to have a go at making our own potions. We do this quite a lot of the year using various formats. I love the way they can really use their imaginations, explore language as well as have a go at making their own spells using rhyming words.

We did two lots of potion making this week.

Potion 1 Resources: Cauldrons (trick or treat buckets) tub with bicarbonate of soda, tub of vinegar with a squeeze of green paint in it, syringes, various creepy crawly creatures from a Halloween bundle, small bottles filled with different coloured squash.

For this potion making tray I tried to limit the amount of water available to show the children the chemical reaction of the bicarbonate of soda and vinegar. They thought it was fantastic and the green paint makes it go a green colour. The children played with this for over an hour and were reluctant to tidy it away for dinner time, by the time they had finished playing we had added a lot more water and they enjoyed seeing how they could only get a bubbly reaction when they mixed the bicarbonate and vinegar, and that it did’t work when mixing bicarbonate with the water. 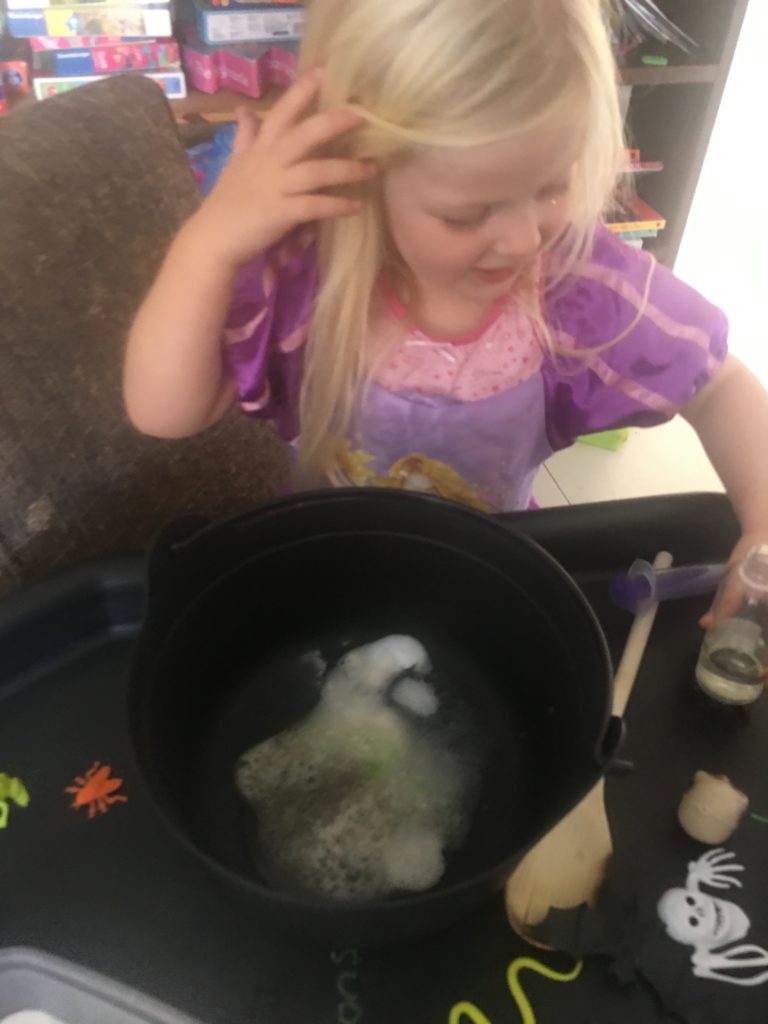 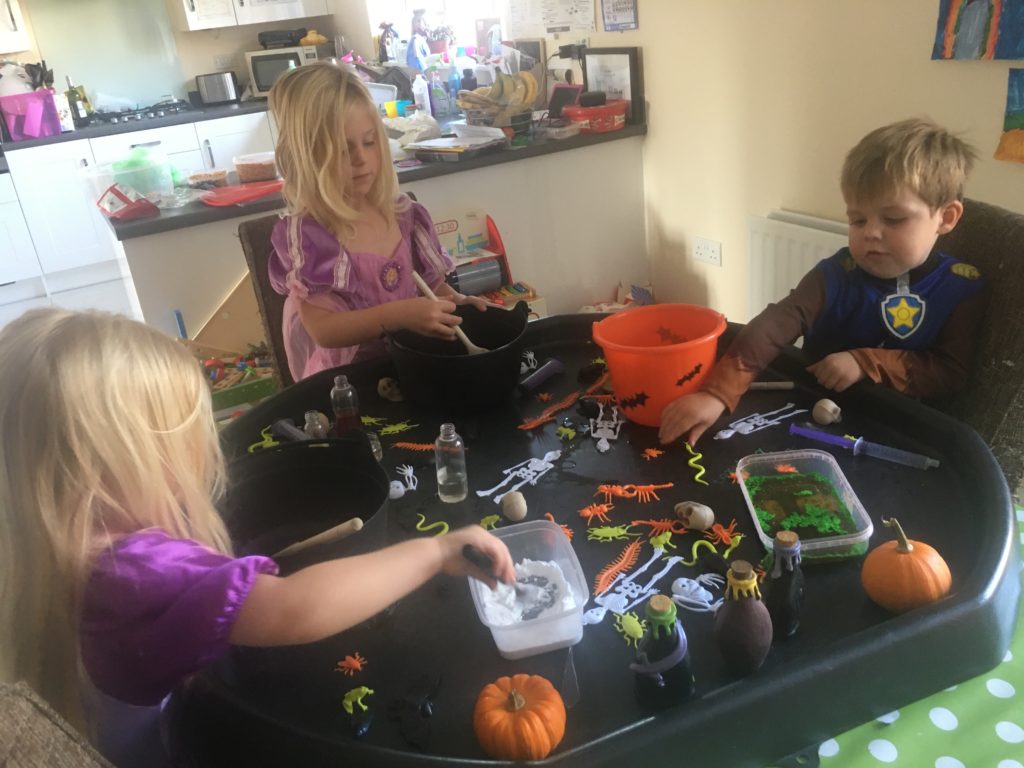 Potion 2 Resources: Cauldrons (trick or treat buckets) various creepy crawlies from a Halloween bundle, old board books sprayed with chalk paint to make spell books, chalk pens, wooden letters (I got mine from The works in the scrapbook section)

For this potion the children had the opportunity to write down their spells in their own spell books. They absolutely loved this idea and Megan in particular spent a good part of the day returning to her book to write more. They had a go at making words using the wooden letters and writing them down. Isabel wrote down a lovely rhyming poem for her spell and then they had a go at making them. Again they played with this for a long time and returned to it continuously. Since using the resources in the tray, they have set up their own potion making activity on a few occasions and the rhyming words we practised have been used during their play. This doesn’t have to be a Halloween activity, there are lots of stories that are about witches and wizards making spells which can be a hook for the children. If you have some of the resources as an invitation to play in your play area at different times of the year the children will be able to access them and develop those role play and language skills. 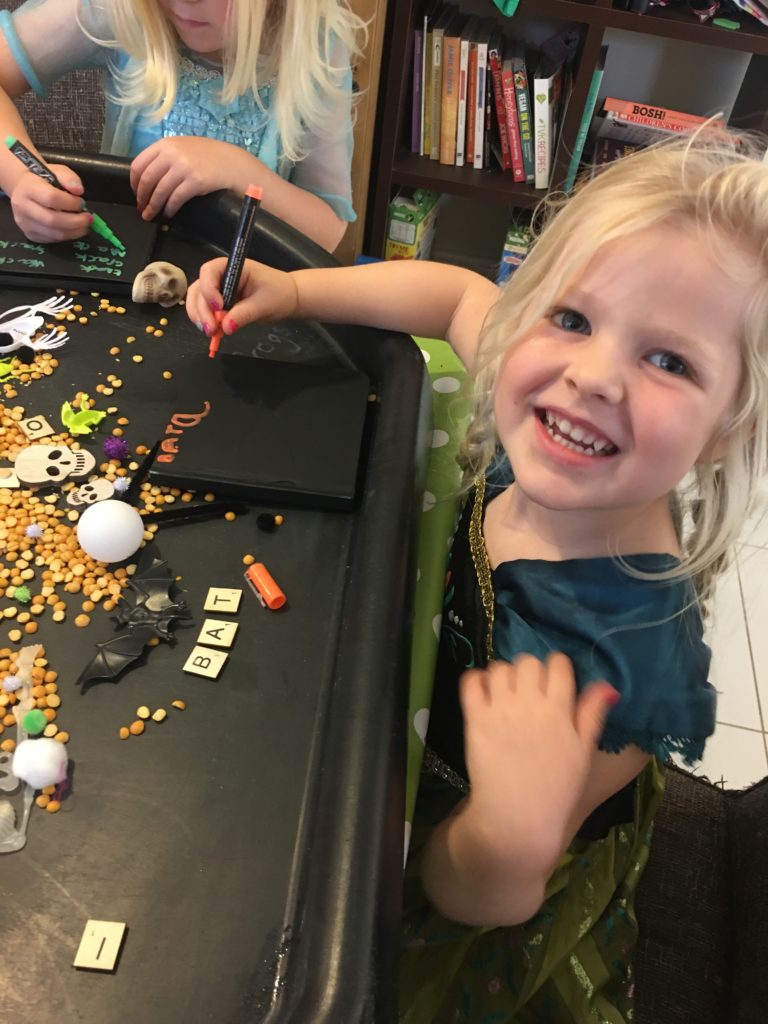 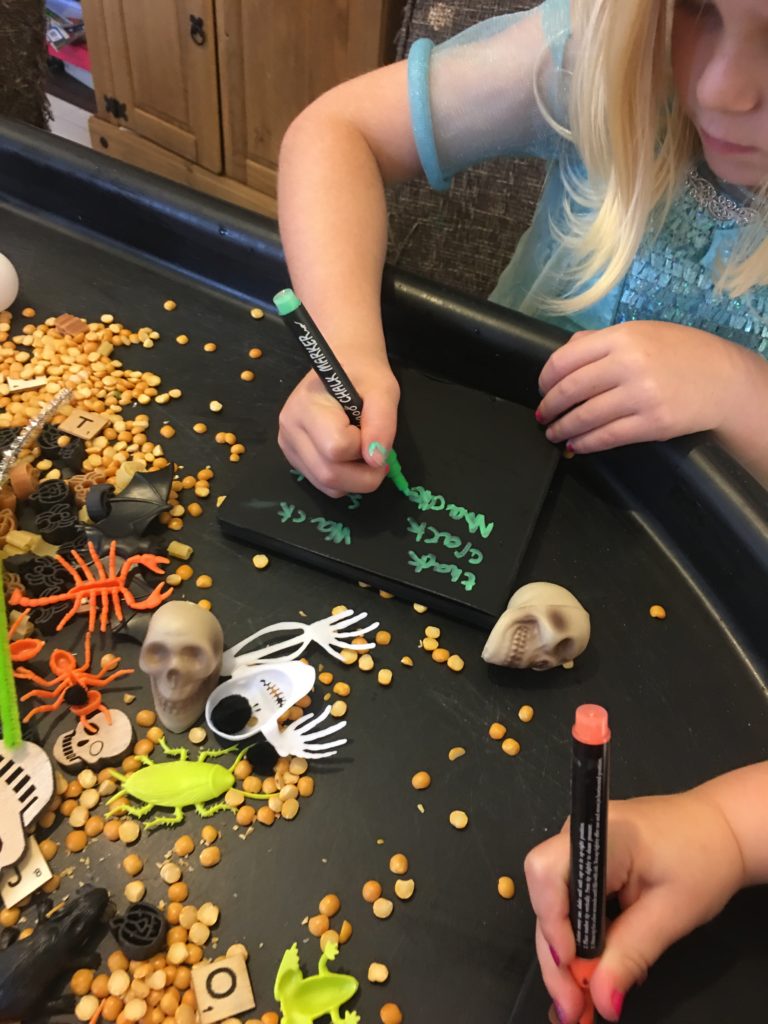 While shopping in Lidl I spotted a bag of Halloween pasta. We put it in a cauldron and the children then sorted it by different categories either colour or picture. They also had a go at making patterns. Isabel tried to come up with the most complicated pattern she could. We kept half of the bag to use as part of our sensory trays through out the year and the other half the children enjoyed for their dinner that night 🙂 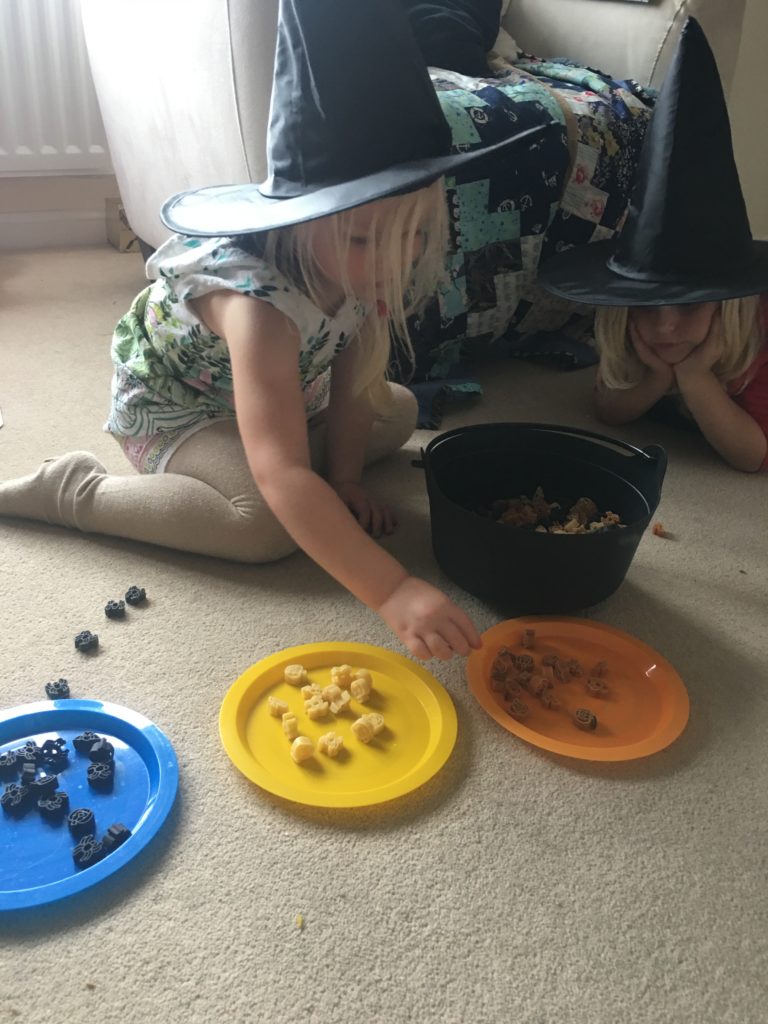 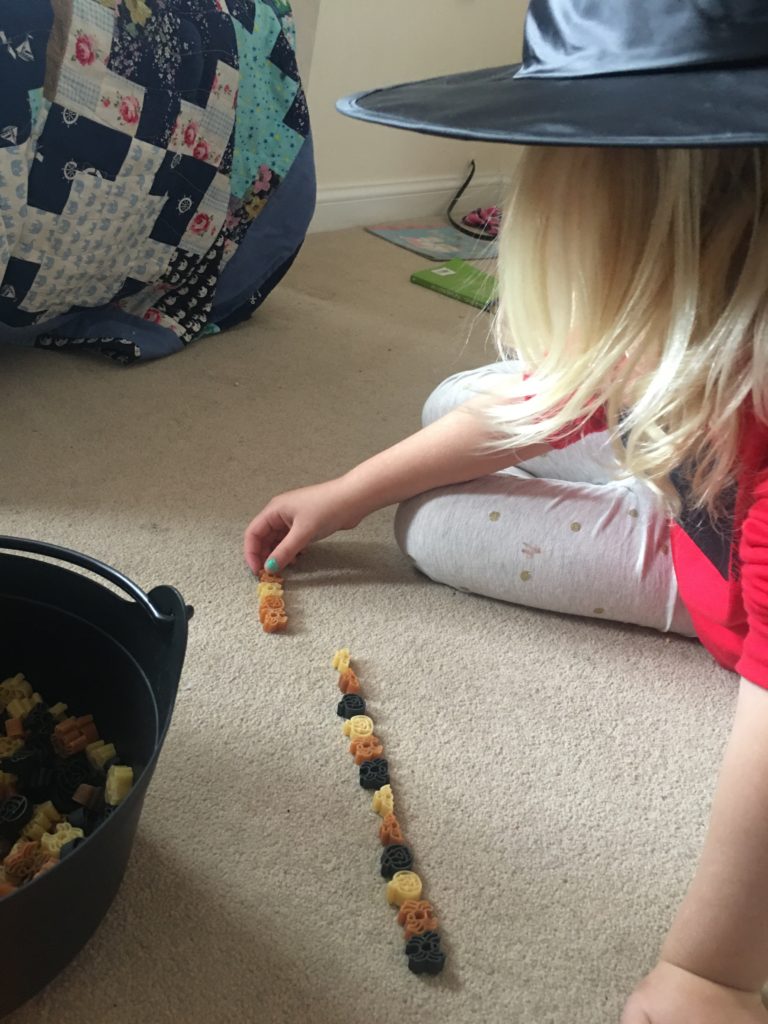 The children all loved exploring the different things they could make with the play dough and resources. Charlie is very keen on spiders at the moment so he made a spider and so did Megan. Isabel made some monster food and Charlie then made a monster. I love activities like this as the resources can all be re used, we take photos for memories and then everything can be put away ready for another activity. Great activity for fine motor skills as children need to roll, squeeze and pull the play dough. Bending the pipe cleaners and accurately placing them where they needed to go also good for hand and eye co ordination. It also helped to develop their imaginations as they thought about what to make and we even had some counting to make sure the spiders had the correct number of legs. 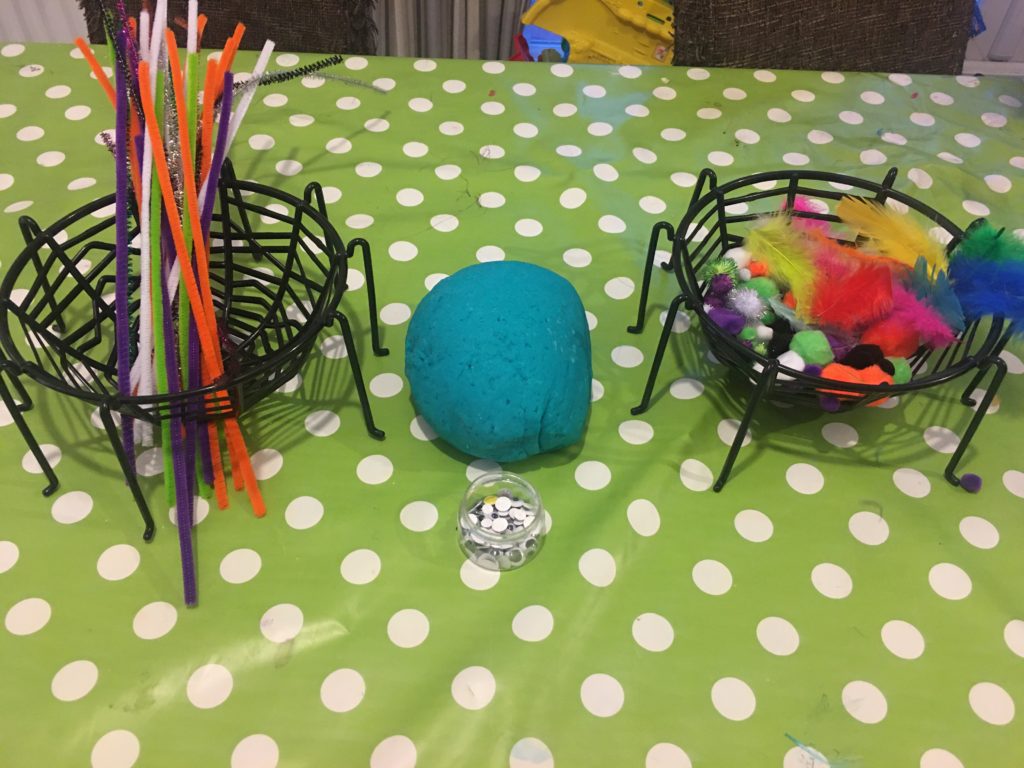 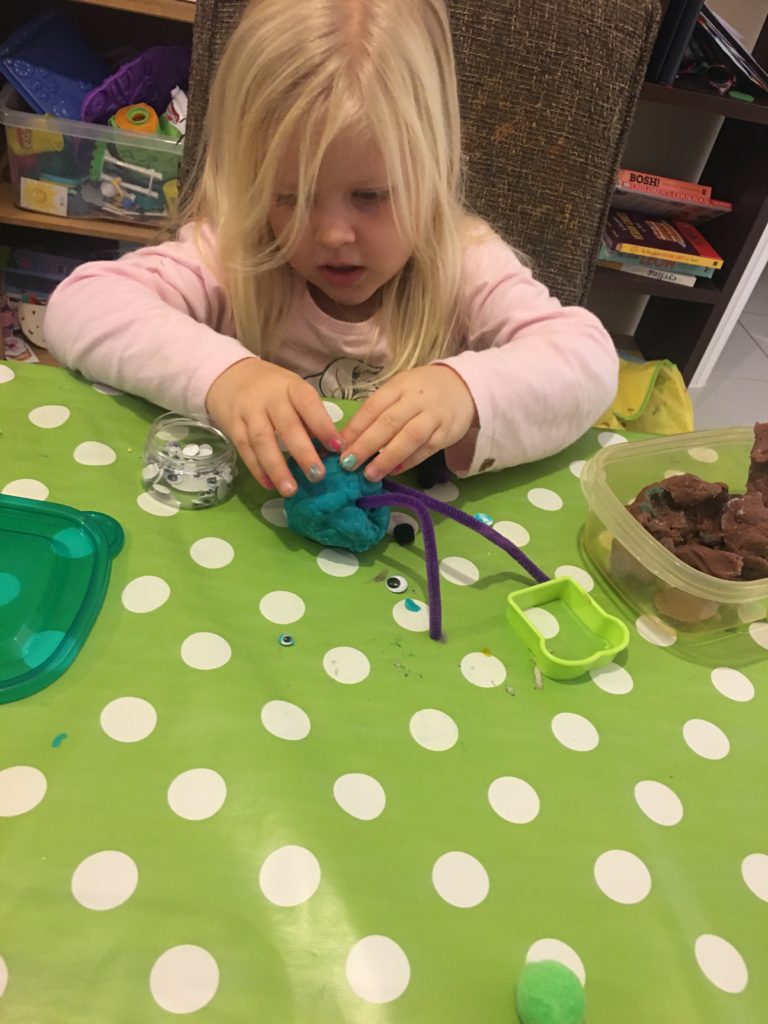 Paint fingers and print to make spider legs and then paint the body of spider. Add googly eyes. When the paint is dry then punch holes around the edges of the plate and then thread wool through the holes to create a web effect. This activity is fantastic for fine motor skills and hand and eye coordination. They were all very pleased with their finished spiders and they are now hanging in our window at home! 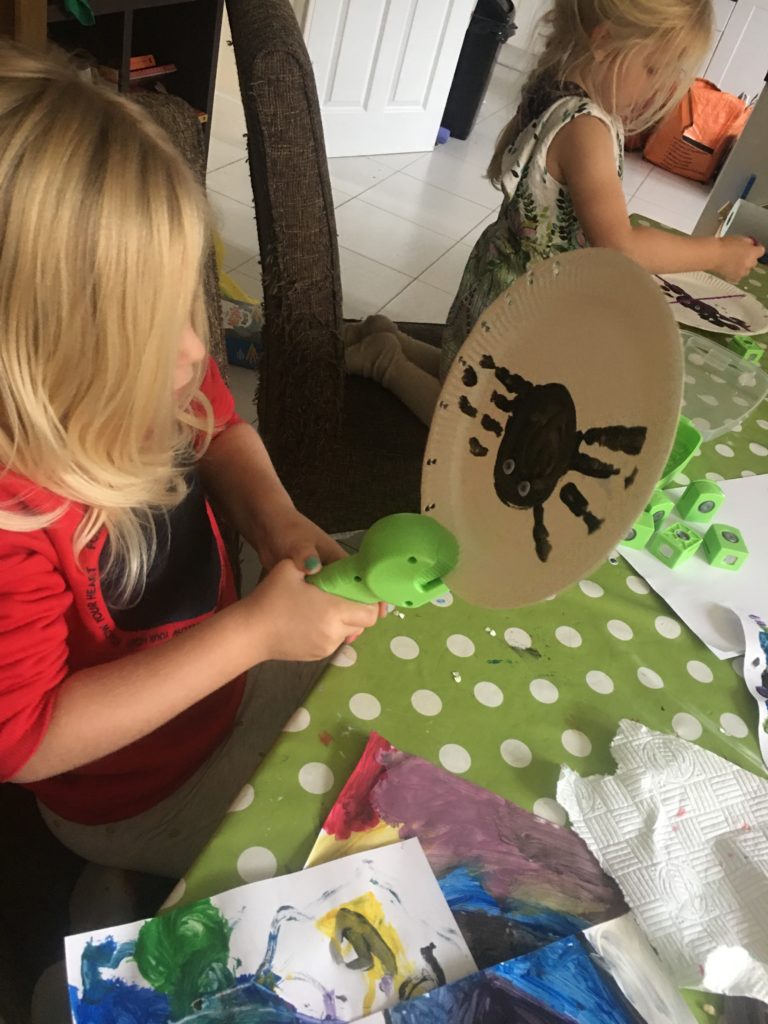 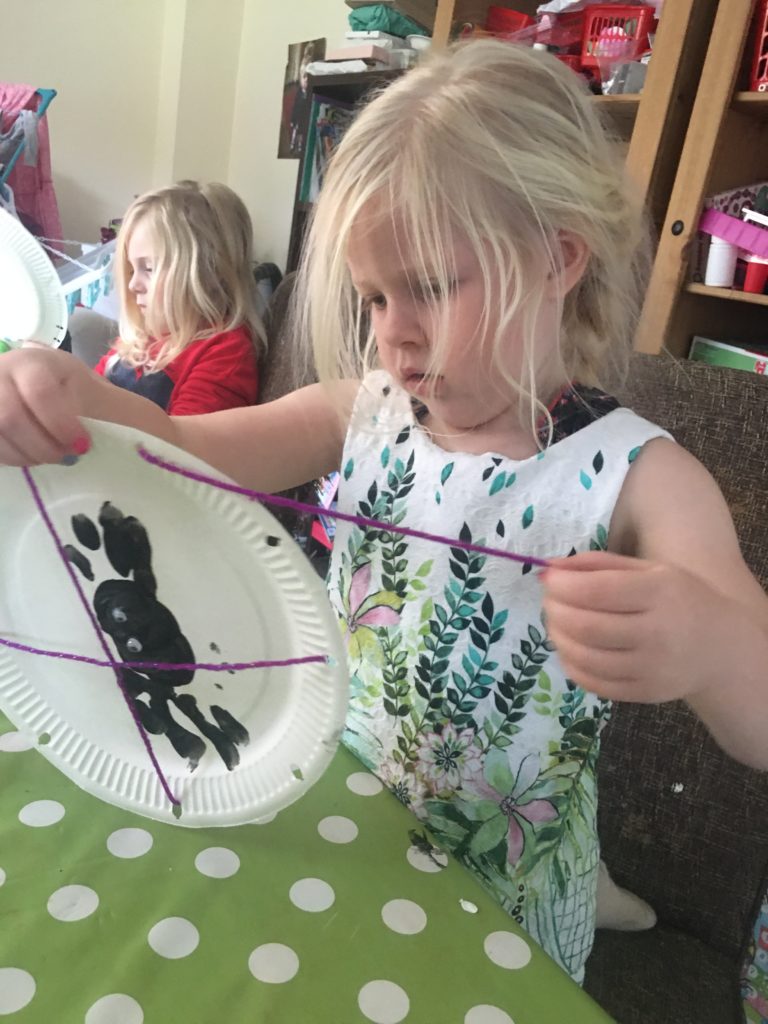 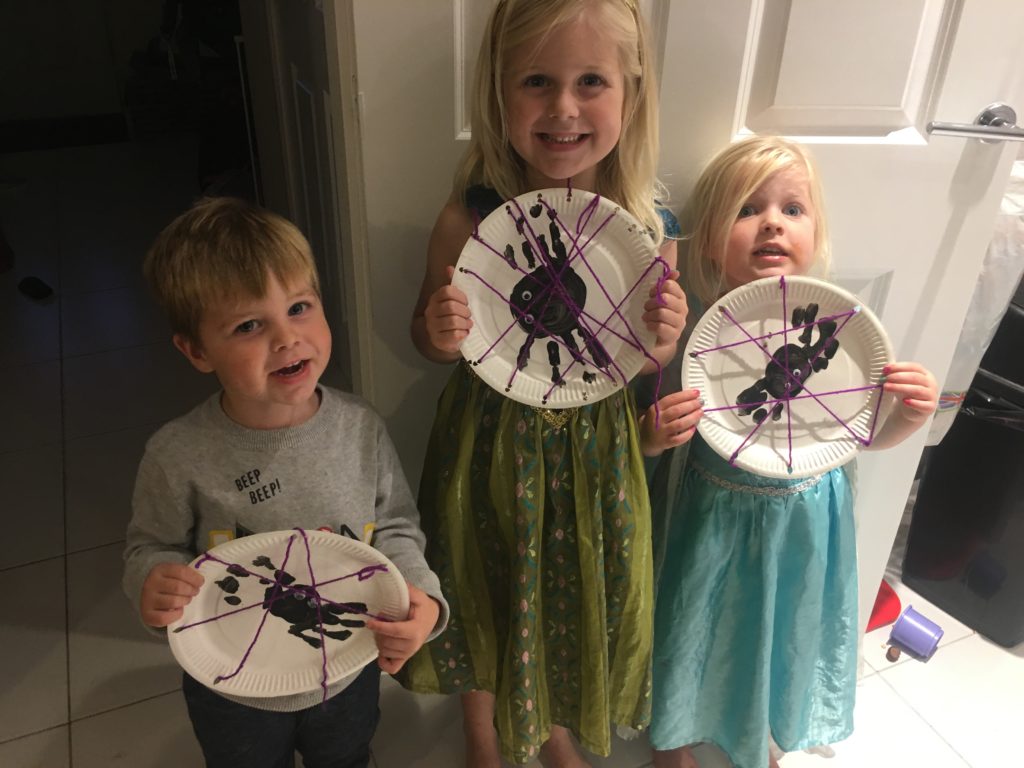 Enjoy your spooky activities and remember it’s not just for Halloween, they can be enjoyed at any time of the year 🙂